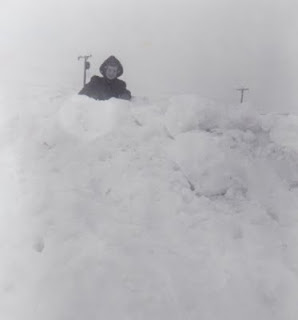 (Originally written to my Dad for his 70th birthday, September 1998)

March ’66…who could forget the amazing storm that was every child’s dream! We were snowed in for days, at least until you cleared enough snow to open the back door. Then we were let loose to burrow through miles of drifts, like little prairie dogs with hidden tunnels and rooms. We could climb a mountain so high we could almost touch the roof of 413. The ’64 Dodge was a buried treasure hidden somewhere in an icy grave. What an experience! What an adventure! I guess it was you, Dad, who finally found the car and driveway, and a way to work, but I was not concerned with those details of grown-up life because I was a kid having a ball in the snow!

November ’86…another spectacular storm hits the prairies, but much has changed in twenty years and my reaction is one of entrapment, exhaustion and desperation. I could not get to work, the snow had obliterated the parking lot of my townhouse in Charleswood, three year old Ari was asking question after question after question about snow, weather, plows, and every other related topic, and I was trying to cope with it all as a newly separated, single parent. I felt like I was in a nightmare. I phoned you in tears.

Blizzards were no longer fun to me. There was no exciting adventure to be found in trying to struggle to the corner store for milk and bread. Ari loved the drifts, once I forced the back door open just wide enough for him to squeeze through, but I just wanted to go home to Selkirk. So, as the plows were just beginning to open up a few major thoroughfares in Winnipeg, you somehow managed to make your way all the way out to Shelmerdine Drive to rescue Ari and me, and take us home to Sutherland Avenue. I was comforted on the couch with a blanket and hot chocolate and Ari was given the task of helping his Poppa shovel the driveway.

Ari probably has fun memories of the blizzard of ’86…playing in the huge drifts, helping to shovel the driveway, and sleeping over at Mormor and Poppa’s house. What I remember is that I have a Dad who comes when I need him, regardless of the obstacles.